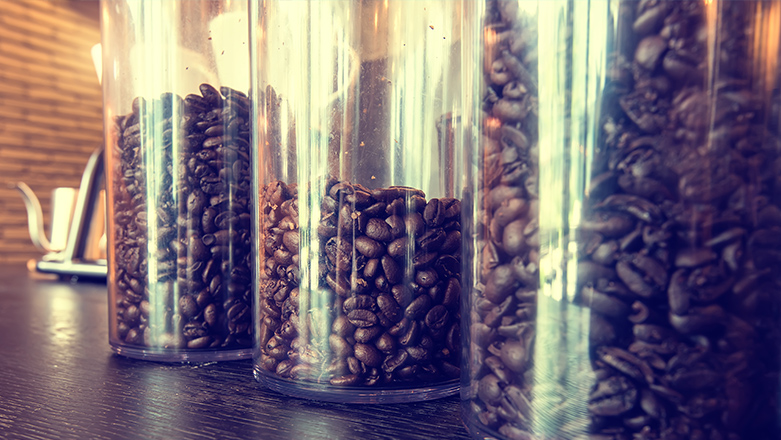 In a fridge? In a jar? Maybe under your quilt? There are many myths and legends surrounding coffee storage. I would like to explain some of them and tell you how to properly store coffee, so it keeps its taste and aroma as long as possible.

What is the expiration date of a coffee?

Coffee is a food product, that can be stored for a quite long time. Most coffee producers say that coffee can be stored up to 2 years. (in case of whole bean coffee).  Indeed – coffee roasted 2 years prior can be safely grinded, brewed and drank, but its taste won’t be first-class. It will still be a coffee, but you won’t notice any nut, chocolate or citrus notes, that are heavily desired by real coffee lovers.

Thanks to running my own coffee roastery and drinking coffee, to put it mildly, quite often, I can tell that coffee tastes best in 3-4 days after roasting and starts losing its quality after 3-4 weeks after roasting. Why then? Well, after roasting, coffee needs to „rest” and degass carbon dioxide. It’s an entirely natural process, that takes place as a result of partial coffee beans carbonization during roasting.

Coffee can be grinded and brewed directly after roasting, but it will reach its full potential after 3-4 days after roasting. But it shouldn’t be stored  for too long as it will lose its flavor and aroma. When you intend to buy a coffee, look for its roasting date. Many producers don’t include this information as it’s not compulsory, but they specify the expiration date.

If you can see that some coffee has, for example, 1 year and 7 months till its expiration date, you can be 99% sure that the producer used a 2-year expiration period, which means that this coffee was roasted 5 months ago. Honestly, I wouldn’t recommend buying this coffee, even if it was a product coming from a highly reputable coffee roastery. 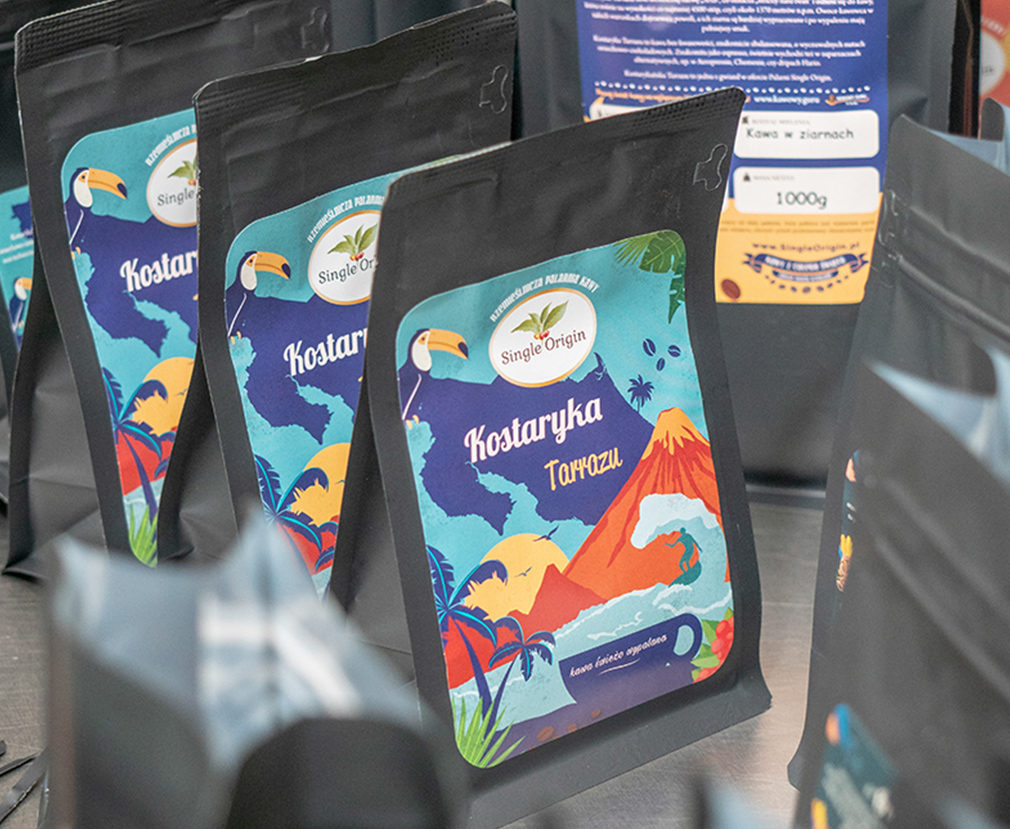 In what packaging and where to keep your coffee?

There is a common opinion, which says that coffee should be kept in a fridge. I don’t really understand where did this come from, but anyway: it doesn’t make much sense. Coffee is a product, that easily acquires other scents. Most people keep meat, dairy products, fish in their fridges.

Do you want your coffee to smell like that? I doubt it. Even if it’s tightly packed, low temperatures do not favor it. So – you should keep your coffee in a room temperature closet, so it’s not exposedto sunlight.

In what to keep coffee? Some people suggest jars. Indeed, big jar of coffee beans looks nice, but in this case, it’s not what we want to achieve. The disadvantage of using a jar is the lack of a vent, which let’s the carbon dioxide, that can still eject from the beans. As I mentioned earlier, coffee beans naturally degass carbon dioxide after roasting.

The most intense ejecting takes time during first several hours after roasting, but this process still takes place (in a lower manner) for many days later. Professional coffee packaging have built-in vent, that lets the gas stored inside out, without letting the air in.

They are made in a way, where during normal conditions the packaging stays tightly closed, but when the pressure inside increases (as a result of ejecting carbon dioxide), the vent rises and lets CO2 out of the packaging. These types of packaging are used in our roastery.

On the outside they are paper made, but they are metallised from inside and guarantee that the air doesn’t get inside. You can also see their vent in the photos below. Opened packaging can be later closed with an attached strip and put into a closet. You don’t have to (and shouldn’t) put your coffee in a jar or put it in the fridge. 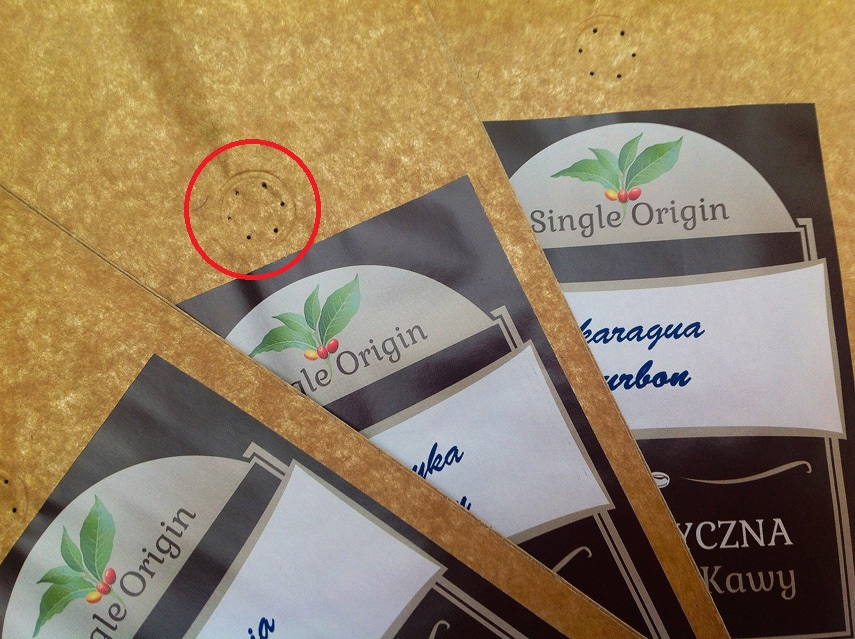 Whole bean obviously! I always recommend buying whole bean coffee and grinding it at home. If you own an automatic coffee maker with built-in grinder, it will grind your coffee for you and if you use an espresso machine or any other method (AeroPress, Chemex or Bialetti percolator), then you should definitely buy a grinder and grind your coffee right before brewing.

Grinded coffee beans quickly lose their taste and aroma. Normally, I’m not a conservative person regarding any coffee topics and I don’t mind experimating, I will always say: grind your coffee right before brewing, don’t store ground coffee, buy a grinder (even a manual one), because thanks to that you coffee wil gain at least +50% on its quality.

Buy the freshest coffee as possible: 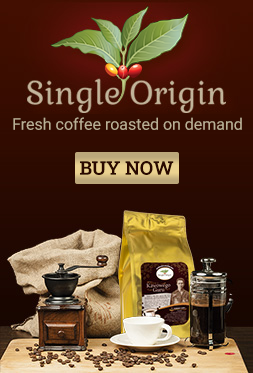 How to recognize a good quality coffee?

ABC of coffee – the coffee guide

Where does coffee come from?

Specialty Coffee – what does it mean?

This website uses cookies to improve your experience while you navigate through the website. Out of these cookies, the cookies that are categorized as necessary are stored on your browser as they are essential for the working of basic functionalities of the website. We also use third-party cookies that help us analyze and understand how you use this website. These cookies will be stored in your browser only with your consent. You also have the option to opt-out of these cookies. But opting out of some of these cookies may have an effect on your browsing experience.
Necessary Always Enabled
Necessary cookies are absolutely essential for the website to function properly. This category only includes cookies that ensures basic functionalities and security features of the website. These cookies do not store any personal information.
Non-necessary
Any cookies that may not be particularly necessary for the website to function and is used specifically to collect user personal data via analytics, ads, other embedded contents are termed as non-necessary cookies. It is mandatory to procure user consent prior to running these cookies on your website.
SAVE & ACCEPT
Go to mobile version